Over the past decade, telecommunication service providers, enterprises and cloud service providers have built out centralized data center and cloud architectures. The advantage of centralized data centers is that scale delivers cost-effectiveness and centralization enables the colocation of technical operations teams with the infrastructure. However, a new class of applications is emerging that has requirements that cannot be met by a centralized cloud architecture, that can be met by distributed cloud architecture. These applications are driven by a rise in new technologies such as artificial intelligence (AI), machine learning (ML), and the Internet of Things (IoT). This new class of applications demands that compute resources be deployed at the network edge, closer to users and things. 5G is another important technology that will accelerate the deployment of compute at the edge. The deployment of edge compute is not dependent on pervasive 5G deployment, but 5G is dependent on pervasive deployment of edge compute. 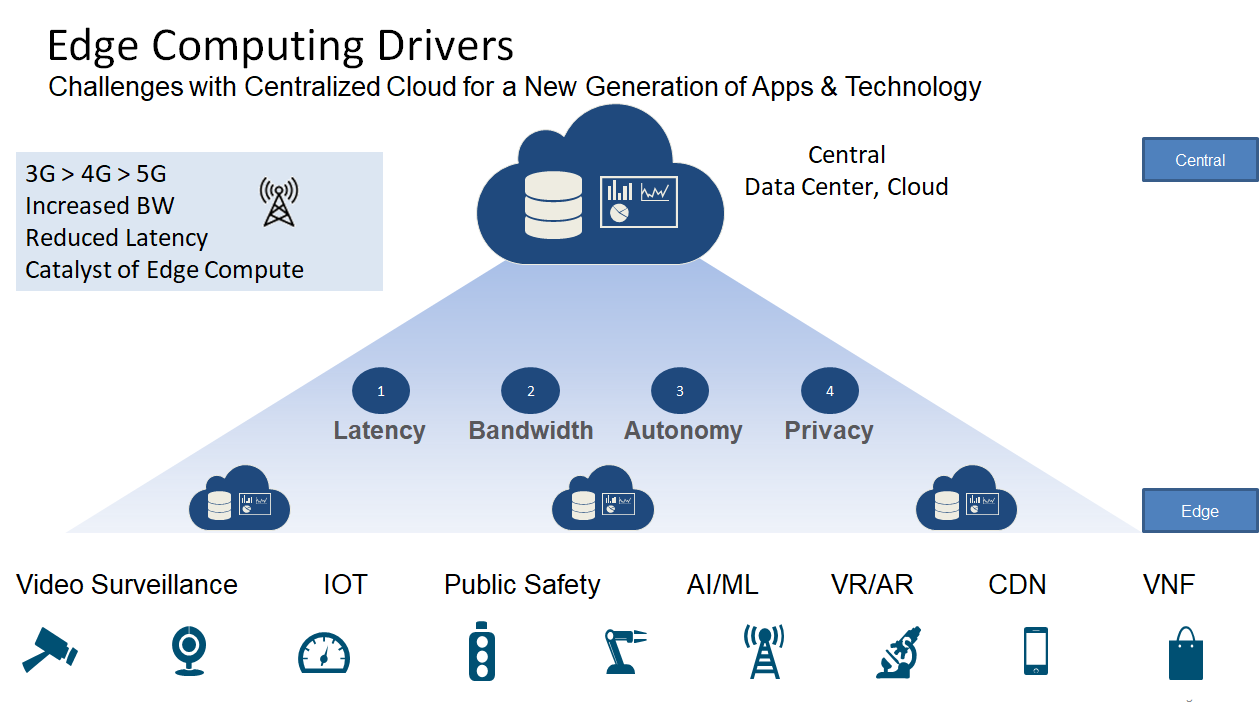 There are four main reasons why data processing needs to happen at edge locations for these new workloads:

As the demand for distributed cloud networking increases, service providers, enterprises, regional cloud providers and colocation/exchange providers will build next-generation mini and micro data centers across multiple edge locations to meet these new workload requirements. With this new distributed cloud architecture comes increased operational complexity and a need to counterbalance it with simplification – a highly automated network fabric that can make multiple edge locations appear as one logical unit in order to simplify the management of multiple remote data center sites.

The Edge Just Got Real

The Network Fabric for Distributed Cloud and 5G

Networking for the Distributed Cloud Era

Hardware and Software Strategies for the Automated Edge

The Edge Gets Real: Data Center Automation for Telco and Cloud Service Providers 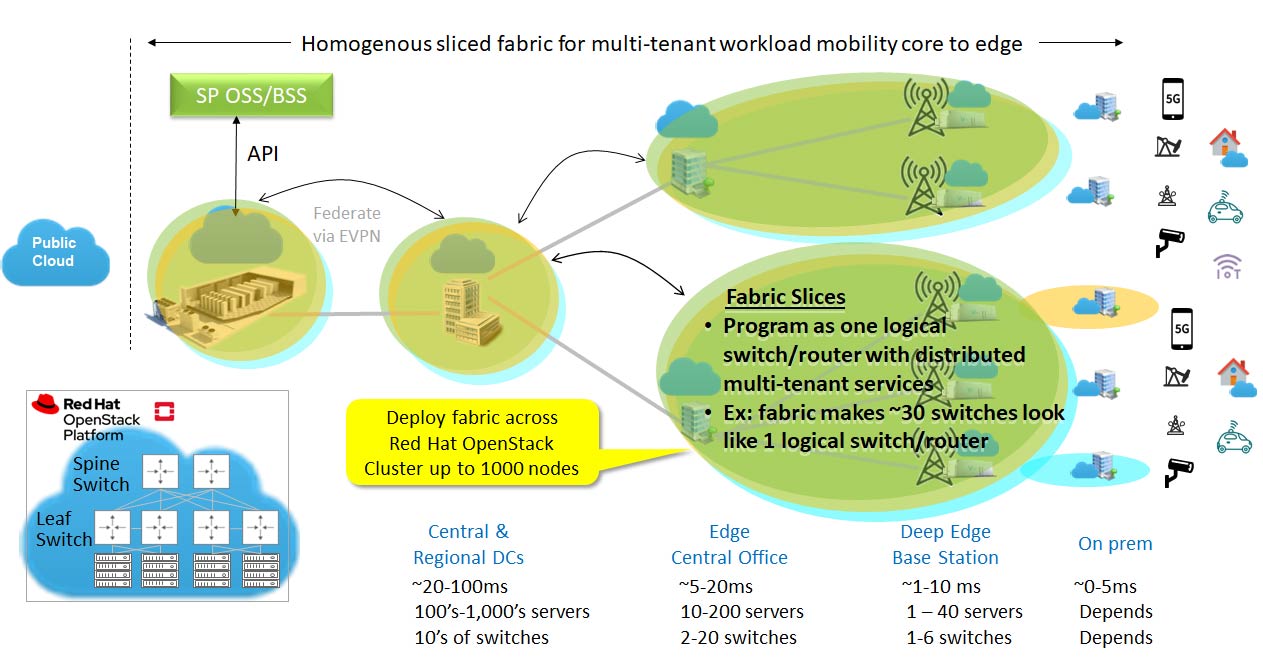 Whereas centralized data centers have cost advantages due to scale and colocated technical resources to manage network operations, edge locations are highly distributed and are often deployed in challenging environments like central offices or lights-out facilities such as modular data centers with no on-site operations staff. This new distributed cloud architecture requires hardware and software that is purpose-built for these environments and that delivers comprehensive automation and visibility to simplify operations.

In many cases hardware must be purpose-built for the edge location. Pluribus partners with Celestica, Dell EMC and Edgecore, which provide a number of unique hardware solutions tailored to different environments. For example, Celestica has recently introduced the Edgestone™ Switch, which is designed for central office environments and is 288mm deep, NEBs compliant, and offers all front-panel access.

In these constrained edge environments, an efficient yet comprehensive network automation solution is critical. Unfortunately, software defined network (SDN) automation, virtualization, segmentation and traffic visibility solutions, understandably, have been designed for highly centralized data centers. These current solutions typically require multiple controllers running on top of multiple servers at each edge location. In a central data center, these additional servers for network automation are “in the noise,” but in an edge mini data center they incur significant cost and consume power and space that is precious. Centralized controllers also suffer from latency penalties as they communicate back and forth with the switch/router infrastructure and also act as a single point of failure. Furthermore, because of their centralized heritage, these controllers often require a controller-of-controllers to manage multiple sites, which increases integration and deployment complexity.

Pluribus has developed a solution that is purpose-built for distributed cloud networking and edge. Our Netvisor ONE OS and Adaptive Cloud Fabric are completely distributed and designed to run on top-of-rack and spine switches that must be deployed for connectivity anyway. These switches are becoming more powerful from a control plane perspective, boasting multi-core CPUs, and increased RAM and SSD memory. Our “controllerless” solution is optimal for edge networking, delivering a cost-, space- and power-efficient solution that provides full network automation, including SDN automation of the underlay, a virtualized overlay fabric, network segmentation/slicing, and comprehensive visibility and analytics. 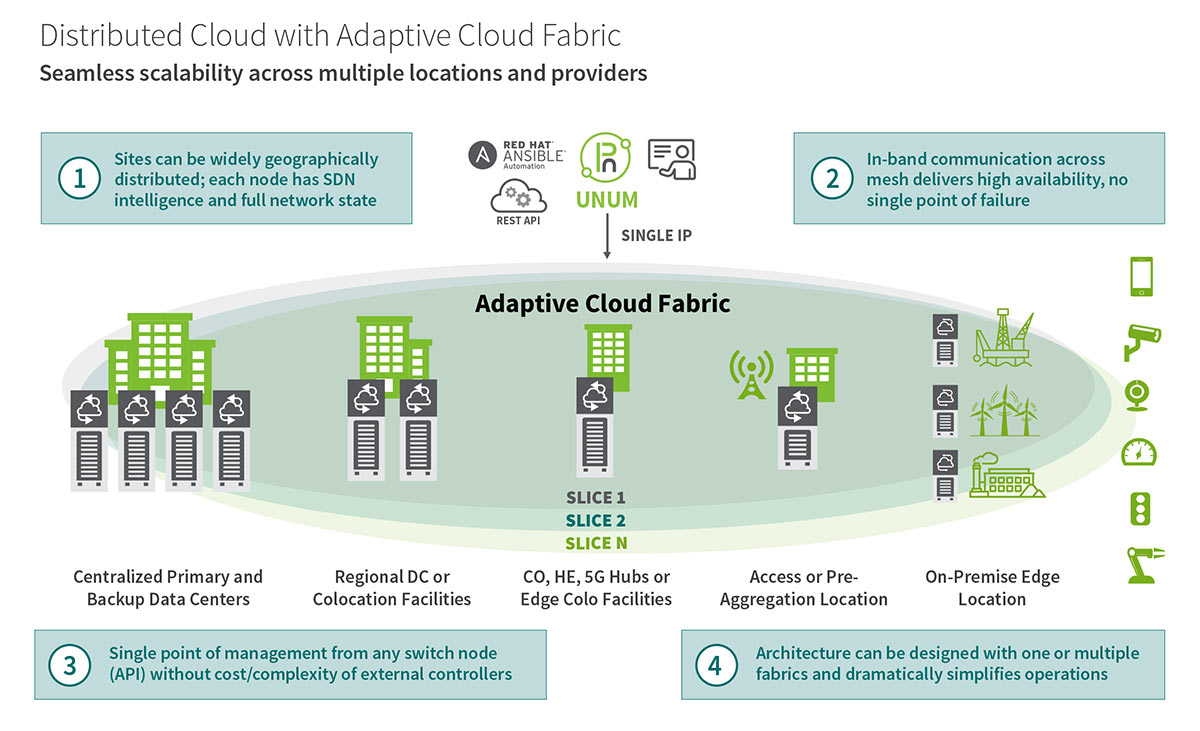 The Adaptive Cloud Fabric can seamlessly scale across multiple data center locations, including centralized, near edge and far edge sites, and provides the following characteristics to deliver lower operational and capital costs, ultra-low latency and increased agility and resiliency: