Today we announced Release 5.0 of the Netvisor® ONE OS and Adaptive Cloud Fabric™ for distributed cloud and 5G. This release, based on the open-source Linux Foundation FRRouting code base, is a significant milestone for the company as we expand into a new market by delivering a next-generation networking fabric solution for distributed cloud. The size of deployments to enable distributed clouds will be enormous, and will include implementations in service provider networks and on customer premises involving a rich mix of compute, networking, storage, and orchestration resources.  ACG Research expects the market’s investment in edge computing (distributed cloud) to exceed $90 billion by 2023, growing at a CAGR of over 60%.

What Is Driving Edge Compute?

Most data center and cloud architectures today are highly centralized. There is an emerging set of applications driven and catalyzed by new consumer technologies, such as advances in IoT and increasingly powerful AI/ML offerings. These applications, such as virtual reality, video analytics, public safety, etc. have a set of requirements that are difficult to meet with a centralized cloud architecture. This has triggered a need for compute and storage to be deployed closer to users and things.

These requirements can be placed into four fundamental categories:

These four buckets of requirements will result in the deployment of compute and storage resources at locations closer to users and things, including in telco central offices, cable operator headends, base station aggregation and other access edge locations, factory floors and remote locations such as wind farms.

Why Are We Using the Term Distributed Cloud?

We’ve identified the drivers of edge compute, but why the term distributed cloud? With edge orchestration players like our partner MobiledgeX, also a founding member of the Kinetic Edge Alliance, the consumption model for edge compute will be cloud-based – spin up containers and the application at a particular edge location, spin down when done and pay for what you used. In this new world there will not be one edge, but many, thus the term distributed. So edge compute plus the cloud consumption model equals distributed cloud. The fundamental responsibilities for our edge orchestration partners will be to provide a single set of APIs for app developers and to dynamically determine where to place the workload to satisfy the application requirements at the lowest cost. If my app requires 100 ms latency, I probably will not use resources that deliver 10 ms latency. 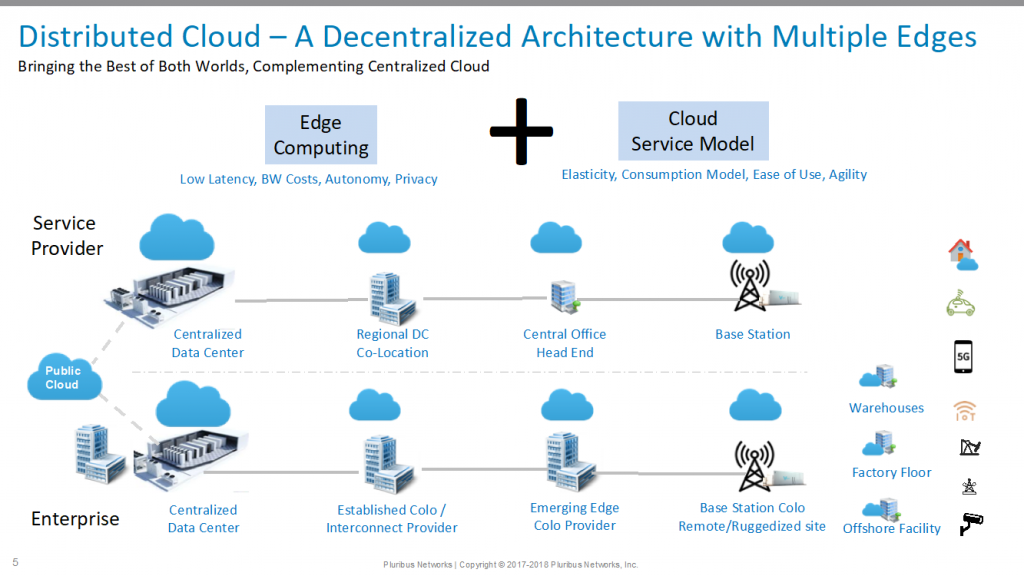 How Does 5G Play into this Market?

The distributed cloud market is emerging and will grow independent of 5G. 5G will be deployed over the next few years and will be an accelerant of edge compute, as it will bring much more pervasive access to broadband speeds and lower latency and present an architecture that is inherently flatter and more distributed. So, while 5G is not in the critical path of edge compute, it will absolutely be a catalyst – distributed cloud and 5G will intersect and reinforce each other to create a larger market and a better customer experience.

Why Is Pluribus Pursuing this Market?

Distributed cloud is a natural adjacency for Pluribus due to the inherent architectural advantages of the Adaptive Cloud Fabric that have been developed over the last 10 years and the strategic direction of our product roadmap. Combine this with the forecast from analysts for investment in this market ($90+ billion by 2023 according to ACG) and the decision is a no-brainer. Furthermore, we are already involved in two major markets that both align well with distributed cloud networking and have already led us down a path of developing edge-optimized architecture and feature sets.

First, we are delivering and continuously enhancing our Adaptive Cloud Fabric for our NFVi partner for their Network Functions Virtualization Infrastructure (NFVi) solution. Through this partnership, we are now deployed in the mobile cores of over 25 major mobile network operators supporting 4G and 5G services. This includes exercising some of our unique capabilities at scale – network slicing, programmability, distributed services, and deep telemetry and analytics, to name a few – resulting in open networking software that is hardened at scale. Furthermore, 5G is just beginning to roll out and the architecture defined by 3GPP is highly distributed. Thus, we will see the NFVi infrastructure naturally move out further to the edge of the network as 5G accelerates, and we are developing features to support that move such as supporting more compact NEBS-compliant switches and adding a suite of new networking functions.

Second, we have been very successful in the multi-site data center unification (interconnection) market because our controllerless SDN architecture is a natural fit for geographically distributed data center sites. A good example of this is the deployment of Netvisor ONE and the Adaptive Cloud Fabric on Dell EMC open networking switches with regional cloud provider Econocom Italia. As the edge market comes to fruition, resulting in an explosion of mini- and micro-data centers, the Adaptive Cloud Fabric can easily stretch across these new sites, presenting one logical entity with simplified management, multi-tenancy, distributed network services and policy enforcement, granular visibility, and elastic scale. For more detail on the advantages of a controllerless architecture in distributed scenarios, please read our blog “Perspective: Controller-based vs Controllerless-based SDN Solutions.”

What Is New in the Announcement?

In this announcement we are unveiling, first and foremost, Netvisor ONE and the Adaptive Cloud Fabric Release 5.0. This brings enhancements in multiple areas critical for distributed cloud and 5G.

This is a significant milestone for Pluribus delivering new SP NFVi and edge scaling features. Our code leverages Linux-based open source FRR – a community where Pluribus contributes code back upstream and leverages the power of the open source community.

Pluribus is not trying to solve the entire distributed cloud opportunity – we are focused on delivering the world’s best networking solution across central and edge data centers and understand that multiple companies will need to come together to deliver a comprehensive solution for distributed cloud. Similar to the open-source approach, we believe there is high risk with any company that claims they can “do it all” and caution edge providers to look to open solutions. Thus we are also announcing the start of our partner ecosystem, which includes hardware partners Dell EMC and Edgecore, orchestration partners MobiledgeX and Red Hat and far edge colocation provider Vapor IO. Each company brings unique edge computing capabilities and expertise to the ecosystem to create a comprehensive solution to address the needs of distributed cloud environments. In a similar vein, Pluribus is playing an active role in several new and important industry initiatives, including as a founding member of the Linux Foundation Edge which includes key initiatives like Akraino, as well as announcing our membership in Vapor IO’s Kinetic Edge Alliance.

The founders of Pluribus had a respectable amount of foresight (and a dash of luck?) to build comprehensive slicing into Netvisor ONE and the Adaptive Cloud Fabric from the very first release of the software. What do I mean by comprehensive? Well, many solutions claim to support slicing but really only create isolation, either at the data plane only or maybe the data plane and control plane, with tools like VLANs or MPLS L3 VPNs. However, what the Adaptive Cloud Fabric delivers is full slicing across the data, control and management planes – and we do this across the fabric. For example, we can slice up a top of rack (leaf) switch so ports 1 and 2 in every location across town, across the country or across the world belong to one tenant or one application, delivering specific performance parameters and providing complete isolation. This includes management isolation, offering the ability for the owner of the slice to manage that slice through a RESTful API via any tool desired, including our UNUM GUI-based management platform. This capability is one of the key reasons why we have been selected by many of our partners and customers, including Steelcase, a large furniture manufacturer in the US, which is using seven slices for their lines of business and one slice for untrusted IoT data.

When I Think of Edge I Think SP – Does this Mean Pluribus Is Now Focusing on SP Only?

Pluribus is focused, but not exclusively focused, on the xSP space. This includes Tier 1 mobile network operators through our NFVi partnerships, in addition to Tier 2 and 3 SPs, multiple systems operators (MSOs), colocation/interconnect/exchange providers, regional cloud providers, managed service providers and internet exchange providers. We are already widely deployed across this xSP space, with nearly half of our over 200 deployments in xSP. However, we also serve the enterprises (the other half), especially those enterprises that are willing to lean into open networking and looking to unify multiple data centers today and prepare for edge compute. As a side note, I attended the Gartner IT Infrastructure, Operations & Cloud Strategies Conference this past December and went into the conference with the mindset that edge compute would live in the SP domain almost exclusively. I was surprised to find that approximately a third of the sessions were targeted at enterprises and helping them prepare for edge compute, mostly focused on leveraging AI and ML for IoT with a goal of increasing efficiency and competitiveness. This has been backed up by a number of enterprise conversations I have had in this topic area.

Needless to say, we at Pluribus are feeling optimistic as we expand into this rapidly growing market to help service providers and enterprises increase their revenue opportunities and competitive posture in the marketplace. It will take an open ecosystem to deliver the solutions these providers need, with each supplier bringing best-of-breed technologies to enable this market. We are excited to deliver our new release of Netvisor ONE and the Adaptive Cloud Fabric to help solve the networking component of the distributed cloud equation. Please don’t hesitate to reach out to me or my team by clicking this link. 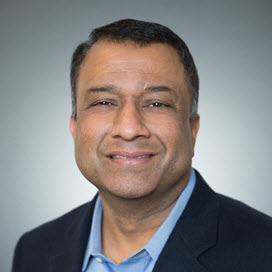 Kumar is the President and CEO of Pluribus Networks. Prior to joining Pluribus, Kumar was VP/GM of HW Engineering for the Enterprise Networking Business at Cisco where he was responsible for the HW engineering execution of Cisco’s Enterprise Networking portfolio. Kumar brings 25 years of diverse leadership and operational experience in the technology industry that spans development, marketing, and engineering across computing, silicon and communications industries.